The Reburialists by JC Nelson

So, this cover seduced me with its gritty, dystopian, military look.  The book turned out to have a lot of action scenes, some zombie types running about and a romance between the two main characters.

That’s cool, but it was a lot of wondering about the other person, fighting, stupid actions that pay off and fighting against authority.  Which is also cool, but since I was expecting something else, I was put off.  Then, when the dialogue became a little silly at times, I had a harder time forgiving it.

So, this is a fun book, light you might call it. (in a way that only dystopian/para/gritty/dark readers understand “light”).  lol.  Still lots of death, destruction, mayhem, crazy-pants action, sadness and the like.  A little weird, and I loved one character, the bad-ass from out of town, the others were ok.  Lots of hieroglyphics, confusion, something bad is going down and our heroes need to stop it or we will all die!!!!

Anyway, fun and crazy with a twist on the zombie/vampire story.  It seems like a stand alone, 3 dead, yet animated hands scratching at your door (not nearly as cute as Thing either).

So excited to read

The Reburialists by JC Nelson

I just got this lovely book in the mail. I have been enjoying the Grimm Agency books and this one sounded good, so I bought it with a gift certificate.  Yay!  Thank you boss for the perfect Christmas gift, a zombie book!

“There were a few things I saw coming, but there were just as many that surprised a me. If you are looking for a blend of hard science, ancient Egyptian mythology and kick ass undead-slaughtering action, THE REBURIALISTS is the book for you. Go get it now. Right now.”  For the whole review by All Things Urban Fantasy, click here.

I NEED ancient Egyptian mythology and kick ass undead-slaughtering action, how did you know JC Nelson?

Anyway, just wanted to give it a little shout out.  It looks good and I am not sure I will get my act together to review it, so sending a little love into the internet cosmos early.

Anyone read it yet?

This was so much fun!  A mystery set in the 1830 Scotland highlands (and it was high time for a genre change for me).  It is told in first person by Lady Darby.  A woman who was married to an anatomist, and who was forced by her husband to paint pictures of musculature and other dissections of the human body, which he took full credit for, of course.  Once it was found out she was the artist, she is feared and her character maligned, but she is now being called upon to assist in an investigation of a murder that happens at her sister’s castle during a weekend (or longer, they always hosted parties for days out in the country).  She is sharp, thoughtful and completely naive. A wonderful and appropriate for a “let’s find out who did it and how to investigate a murder together with the reader” type of combination for a mystery heroine.

The intrigue is high, the censure sharp and mean and the stakes, life or death.  If you like regency and mystery, mixed with a little historical fiction, you can’t go wrong here.  Lady Darby is spunky, the politics of the era keep her confined, but she works with what she is given. I love that her knowledge works both for and against her and society is full of idiots. A good mystery of “who did the murder and why”. I figured out who it had to be kind of early on, but there were still some surprises and it was all solid. The mystery is pretty good, it is of course someone hanging out at the party. I mean, that is what you expect.  Which of the political and ambitious animals was it?  Her reputation is seriously on the line, with a tiny bit flirting mixed in for good measure.  Looks like there is a promise of a love interest down the series line.

Anyway, I enjoyed it and have the second one so will have to read it soon to see what murder/death/kill Lady Darby solves next.  3.5 – 4 stars.

I think the end of this year is on a Merry Go Round being run by little kids chanting “Faster!”  What the heck?  Or are we in the middle part of a whirlpool about to get sucked down?  LOL, whatever the answer, time speeds up at the end of the year.  Still lots to do and a quickly approaching deadline.  Anyway, I decided I should post this picture I took with my phone in Brooklyn, NY a few weeks back.  The year is setting, and it is beautiful. 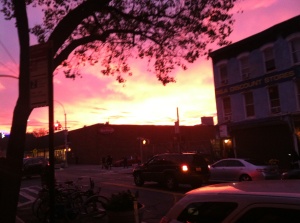 I just need to remember that.  Lots to do, people to see, fun to be had, presents to buy, cookies to bake, run, run, run.  I am one of those crazy people trying to go faster.  But I must remember to stop and look at the golden light, the pinks and purples and endless skies.  We are alive and the world is fabulous.

Airplane Reading – I Am Princess X 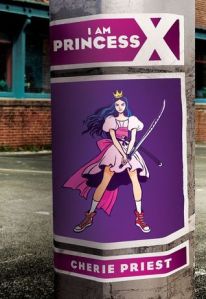 I Am Princess X by Cherie Priest

This is a YA read with a comic strip integrated with the story.  I have another one of those on my TBR called In The Shadows which is gorgeous. You get the benefit of graphic novel with story around it.  Sort of like Allie Brosh’s essays (which I also absolutely loved and highly recommend, they made me laugh so hard my husband kicked me out of the room).

This story has a superhero feel, fairly improbable but lots of action, a bit of a mystery and it was just plain enjoyable to read.  Though, it deals with some rough subjects.  Murder of a parent (superhero!), death and destruction, and lots of cyber hacking.  It really made me want to run around Seattle though.  It integrates the city, using existing topography as clues, almost making it a character as well.  If you ever noticed the Obey Giant stickers and artwork, which you should be able to find in most urban settings, this book started out with me thinking about good old Andre as stickers of Princess X start showing up around town.

The ARC was missing some of the comic strip pictures, they were simply described so I think I would like to get my hands on the published book at some point.

Lots of danger, intrigue, clue finding, strong female characters and crazy feelings.  It is a load of fun and if you like superheroes and comic books, check this story out.  4 stars.

Posted in Fiction | 2 Comments
Lost Inside The Covers
Create a free website or blog at WordPress.com.
Loading Comments...