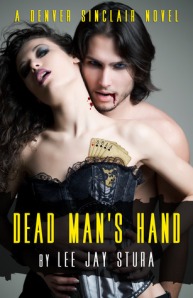 This book takes place in 1906 up in San Francisco.  Our hero Denver Sinclair, tells this story from his POV (which is refreshing since most of the paranormal heroes these days are women!) and is a bit of an anti-hero who you root for anyway.  He is a relatively new vampire, serving an evil mistress who has bonded him to her with a blood debt.  He owes her a lot and like an indentured servant, sees no freedom in sight.  Denver likes to gamble and he is not an obedient man, so he cheats in every way possible, either by skimming off the top of his boss’ deals to playing cards and winning every time.  Denver is in love with Lily, a Chinese human woman and is trying to figure out how the two of them can have a future together and away from  his evil mistress, when mother nature throws a huge monkey wrench in everyone’s lives.  The earthquake of 1906 hits in the early morning and afterwards fires raged out of control throughout the city due to broken gas lines.

Denver and Lily survive, though Denver has to go to ground right after the quake to survive the dawning day.  Once they escape the building rubble they race for their lives across the burning city with run-ins from the army, refugees and his master’s minions.  Denver is hoping against hope that his master died in the quake and he will finally be free.

So, Denver is an interesting character.  I really wasn’t sure I was rooting for him for a while, because he isn’t a good guy by any means.  But by his actions, you find he is practical, and human in his thinking, but not evil.  It is the wild west after all, and when he was human he didn’t have the best judgment and it hasn’t really changed now that he is a vampire!  The story is quite fun, escape and survival being the issues to deal with.  These two are thwarted at every turn.  The race against the fire and the army are interesting.  Not quite as breath-taking as they could have been.  It almost seemed like Denver and Lily had a lot of time to do things…yet the fire was right behind them so it felt a little incongruous at times.  But the action is high, the characters grow on you and you root for Denver.  Lily is a spitfire and she complements Denver.  The storyline did not go where I expected it to, which was enjoyable and Stura had better be writing a sequel because there is definitely more story to be told with that ending!  I loved the setting, the Barbary Coast was fairly lawless in a lot of ways and these vampires are carving out a niche for themselves.  The other interesting thing is that Stura’s vampires, while strong and magical in many ways are not perfect and flawless.  They can’t get away with everything they want and actually have to be careful of discovery.  It made them much more interesting as characters to have a few weaknesses.

This is a historical urban fantasy with a male lead first person POV with action, adventure and paranormal craziness.  It is a strong first novel and I am looking forward to seeing more from Lee Jay Stura, 4 stars.

I love to read! I always have a book or four going, I have more books in my to-be-read pile than I can read in a year and yet I continue to haunt the bookstores. I have a problem, but I somehow soldier on. I enjoy talking books, so pass on your recommendations and thoughts - I would love to hear them.
View all posts by ocdreader →
This entry was posted in Fiction, Urban Fantasy. Bookmark the permalink.