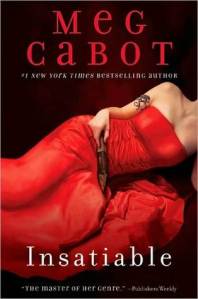 I haven’t read many Meg Cabot books, but this one had a fun cover and I found it at a used bookstore, so it had to come home with me.  It turned into a wild romp of a book with an ending I didn’t expect. I love that. Other than that this book pokes fun at itself from the get go as everyone is a vampire in a vampire obsessed world because hey, how weird, there is a character named Meena and some talk about what Stoker got wrong and right! Silly. Also, Meena writes for a soap opera named Insatiable, so draw that parallel since the book is of the same name. Remember, soaps are over the top, chock-a-block with crazy situations and characters, if that drives you nuts, look elsewhere.

Meena is a strong heroine with a hero complex. The characters are quirky and pretty interesting, I remembered who was who and mostly became invested in their outcomes. I did figure out who the bad guy was quite quickly, but I don’t think Cabot was trying to keep it that much of a mystery. Meena’s ability is a little different than what we are seeing in similar books these days and she has already dealt with it; she knows what works to help others and what doesn’t. Figuring out her ability is not what this story is about, which was refreshing to me. The target age of this novel seems to be early 20s because there aren’t any characters trying to figure out where to start, but rather how to continue. Meena’s brother has been laid off and living with her, her best friend is pregnant, Meena is striving towards a promotion and works her butt off and Meena has to make a very big choice about which direction her life will go.

It is a bit of a paranormal romance, but also something else like a sort of a wacky character study of vampires vs vampire hunters, what a “good” vampire might be vs a bad one, vampire dogs and a big ole fight at the end. I will pick up the next book in the series. I enjoyed the tongue in cheek wackiness and am interested to see if Cabot keeps that up.  I give this book 3 stars.

I love to read! I always have a book or four going, I have more books in my to-be-read pile than I can read in a year and yet I continue to haunt the bookstores. I have a problem, but I somehow soldier on. I enjoy talking books, so pass on your recommendations and thoughts - I would love to hear them.
View all posts by ocdreader →
This entry was posted in Fiction, Paranormal Romance, Urban Fantasy. Bookmark the permalink.