Review – Masque of the Red Death 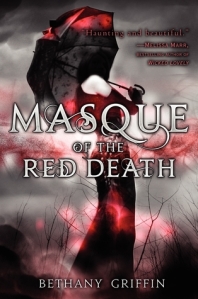 Masque of the Red Death

Atmospheric and tense, you see this world through the eyes of Araby, a girl who wants to simply forget.  She assumes her parents blame her as much as she blames herself for what happened to her brother and she floats through this post-plague world in a drug-induced haze until events conspire to bring her face to face with the reality surrounding her.  This is a re-imagining and a fleshing out of Poe’s extremely short story, The Masque of the Red Death.

This takes place in an alternative, steampunk-type reality where people have to wear masks to avoid contracting the plague.  There is no cure. Araby’s father is a scientist who developed the masks.  So she is approached by the brother of a friend to steal from her father to help the resistance, because of course there is an evil prince who lives in a castle attended by people wearing masks…

“We take a sharp turn, and the castle looms above us. I wasn’t prepared for the immensity of it. Like a giant hulking toad crouching out on the peninsula, coldly menacing and exquisitely drab.” (pg 144)

The story for me felt like I could see it through gauze or smoke.  It isn’t that detailed or that crazy until the end really, but things were left out and unknown because Araby hasn’t noticed what was going on around her until after we follow her about for a while.  Since it is in first person, we as readers see this world through her drug-induced, head in the sand fog for quite some time.  It is brilliant really, because not too much came into sharp focus for me until the end, when Araby finally begins to understand things which should have been clearly evident for a while.

“Just because you don’t want to see something doesn’t mean that it will go away. Do you think inhumanity doesn’t exist if you pretend not to see it? Or maybe get too drunk to understand? We’ve forgotten the things that make life worthwhile.” (pg 174)

You learn a lesson with Araby, life goes on regardless of how much you don’t to believe it.  Horrible things happen whether you see them or not, but so do wonderful things.  You have to LIVE to get the good with the bad. You have to care to survive. Once she starts caring and trying, even in her half-hearted attempts, things begin to happen.

There is a kind of love triangle, which is off kilter by the end and I have absolutely no idea where Griffin is going to take it. Honestly, I don’t even know which guy I would root for. That makes it supremely fun actually.  So there is a bit of a cliffhanger at the end because there is plenty more action that needs to happen, and more things to work out, plus the plague seems to be morphing.

The bad guy is monstrous, but there are a bunch of bad guys running around making mischief and things are falling apart at the seams and it is uncertain who will triumph.  I didn’t love this book the way some people seem to, but I enjoyed it quite a bit, devoured it quickly and am looking forward to the next installation.  4 green and scaly stars, floating on a river, ready to chomp on the poor plague ridden souls who have left this world.

I love to read! I always have a book or four going, I have more books in my to-be-read pile than I can read in a year and yet I continue to haunt the bookstores. I have a problem, but I somehow soldier on. I enjoy talking books, so pass on your recommendations and thoughts - I would love to hear them.
View all posts by ocdreader →
This entry was posted in Fiction, Steampunk, YA. Bookmark the permalink.

9 Responses to Review – Masque of the Red Death