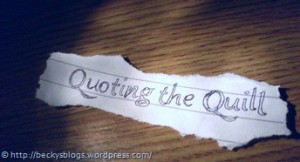 “I can be President of the United States, or I can control Alice. I cannot possibly do both.” Theodore Roosevelt talking about his oldest daughter Alice.

I read a young adult book which was a historical fiction about Jack the Ripper ending up in New York City, and the main protagonist has a few run-ins with both President Roosevelt and his irreverent daughter Alice.  I have decided that if I could have dinner with any person living or dead – you know those question games? – it would be Alice Roosevelt.  Now if I can remember that answer in the future when asked.  🙂

“If you haven’t got anything good to say about anyone come and sit by me.” – Alice Roosevelt Longworth

That quote was in the novel and it is a really good one.  A few others I found on Wikipedia -(so take that with a grain of salt)

Of Calvin Coolidge she once said, “He looks as if he were weaned on a pickle”.

About Teddy Roosevelt, “Father always wants to be the corpse at every funeral, the bride at every wedding, and the baby at every christening.”

Senator Joseph McCarthy once took the liberty of calling her by her first name. In response she looked at him icily and declared, “The policeman and the trash man may call me Alice; you.can.not.”

Supposedly Lyndon B. Johnson proudly showed off an abdominal surgery scar and Alice responded with, “Thank God it wasn’t his prostate.”

She would have been a fun friend to have, but I would imagine you would want to keep her on your good side!  I wish I knew about her when I used to have to do reports on people “you admire”.  That would have been fun.  I can’t wait until someone writes a historical fiction about Alice, I would so read that!

I love to read! I always have a book or four going, I have more books in my to-be-read pile than I can read in a year and yet I continue to haunt the bookstores. I have a problem, but I somehow soldier on. I enjoy talking books, so pass on your recommendations and thoughts - I would love to hear them.
View all posts by ocdreader →
This entry was posted in Meme, Quoting the Quill. Bookmark the permalink.

6 Responses to Quoting the Quill – #1