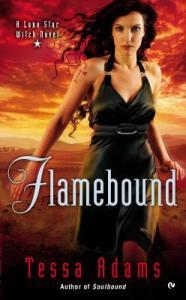 I really enjoyed the first book, Soulbound.  This one, not as much.  Why?  The story was there.  Evil people killing other people, Xandra feeling everything they go through.  It is dark and yucky and tense.  But Xandra has a new love interest.  She doesn’t fully trust him, but can’t help but jump his bones every second they hang out.  And she is crazy co-dependent. She takes off running after the bad guys either because her magic makes her (crazy magical powers, truly) or because she doesn’t think and for some reason she thinks being the first on the scene will save everyone dear to her.  Except for herself I guess.  People help out at the last minute and she never seems to learn she can’t do it all herself.  It REALLY got on my nerves.  She has that YA “too stupid to live” syndrome.

Anyway, besides her character flaw of being too willing to die for everyone else, she is fine.  She has that angsty new adult thing which hey, she has been dating this dude one whole week and about 2 weeks before she was in the hospital…so, ok, she is allowed to be messed up.  But come on!  I am hoping the next book puts a little time between this book and the next.  I will try it because I like how dark it gets and this magic power is pretty crazy, also the characters have potential, it was just such a departure from the first with the relationship stuff.  This one is way more a paranormal ROMANCE than the first one.  Then with the I trust you, no I don’t, but I do, but I don’t.  Blah blah blah.  Meh.

Anyway, hoping the next is better.  I flew through this book but wanted to chuck it against the wall a few times, so it was ok, 2 stars hidden under a pile of rubble, calling weakly for their rescuers to find them.

I love to read! I always have a book or four going, I have more books in my to-be-read pile than I can read in a year and yet I continue to haunt the bookstores. I have a problem, but I somehow soldier on. I enjoy talking books, so pass on your recommendations and thoughts - I would love to hear them.
View all posts by ocdreader →
This entry was posted in Fiction, Paranormal Romance. Bookmark the permalink.